On October 11, 2020 at 8:44 p.m., the South Bruce Ontario Provincial Police (OPP) received a report of a collision involving a vehicle and horse and buggy along Bruce County Road 10 in Brant Township. Officers responded to the scene with members of the Elmwood Fire Department and Bruce County paramedics.

A 10-year-old passenger in the buggy was pronounced deceased at the scene.

A 9-year-old passenger in the buggy was air lifted to a London hospital with life threatening injuries.

Members of the OPP Technical Traffic Collision Investigation (TTCI) unit are attending the assist the South Bruce OPP with this incident.

On October 8, 2020 at 10:55 a.m., members of the South Bruce Ontario Provincial Police (OPP) responded to a report of a vehicle fire at a residence in the 200 block of Durham Street in Kincardine. Officers arrived with members of Kincardine Fire and Emergency Services to find a vehicle fully engulfed in flames.

Initial investigation revealed that 2 people were residing in an outbuilding on the vacant property. They were taken into custody and a collection of weapons were seized.

A 42-year-old resident of Kincardine was charged with Unauthorized possession of a weapon, 2 counts of possessing a firearm or ammunition while prohibited, Unlawfully in a dwelling house and Enter premises when entry prohibited. The accused was held in custody pending the result of a bail hearing scheduled for October 9, 2020.

A 39-year-old resident of Saugeen Shores was charged with Unauthorized possession of a weapon and Enter premises when entry prohibited. The accused is scheduled to appear in court on December 16, 2020 to answer to the charges. 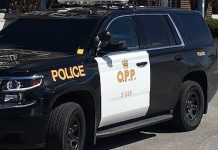 Two charged after more than $100,000 of Methamphetamine seized